In addition well-known celebrations such as Christmas and New Years, Ecuador is home to many indigenous communities with their own special holidays. These holidays consist of great festivals full of community gatherings and Ecuadorian traditions. These times of year are great for visiting certain places in Ecuador, as local culture, history, and tradition personify themselves in public for everyone to see and enjoy. Some holidays are nationwide, where businesses are shut down and every Ecuadorian takes part in celebrations. These include 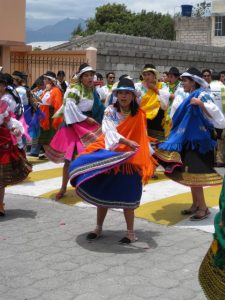 Carnaval. Prior to Lent, people like to indulge in all their desires in preparation for the fasting and restrictions of Lent. People typically engage in tricks and tom-foolery, in ways such as throwing water balloons at random people around the city. Other forms of celebration include dancing, music, parades, sporting events, and of course, eating and drinking to the heart’s content.

Easter Week. Also known as Holy Week, or Semana Santa, the days leading up to Easter Sunday are full of religious celebration. Palm Sunday marks the beginning of the traditions when people carry palm fronds down the street on their way to mass. Plaza De San Francisco in Quito even has a ceremonial blessing of the palms. Religious parades continue for the entire week in locations all over the country, and most stores and businesses are closed so everyone can participate. At noon on Good Friday, Quito is home to a massive procession where people dress up in costumes with religious significance in commemoration of Jesus’ death. A traditional dish eaten during this week is Fanesca, which is soup made from salt cod and other ingredients. On Holy Saturday and Easter Sunday, huge masses are held all day.

All Saint’s Day. Also known as Day of the Dead, or Día de los Difuntos, people all over Ecuador pay their respects to their loved ones who have died. Taking place on November 1st and 2nd, locals visit cemeteries to offer baked goods and flowers to the deceased, hoping that these gifts will accompany the souls in the afterlife. This time of year, locals also drink Colada Morada with Guagua de Pan. Colada Morada is a thick purple beverage made from fruits and other natural ingredients, and Guagua de Pan is sweet bread in the shape of a baby doll.
Ecuador also has other indigenous festivals that are more specific to certain locations. Otavalo and Latacunga are two areas with large indigenous communities, so they are known for their lively festivals. 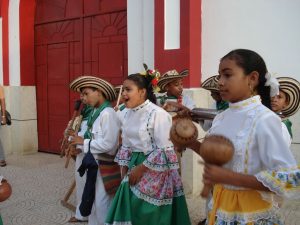 Yamor Festival. The first two weeks of September in Otavalo mark this charismatic festival which celebrates successful corn harvests. This holiday combines pre-colonial traditions with Catholic religion in commemoration of the harvest, and the town always elects a “Yamor Queen”. A special liquor known as Chicha, made from corn, is made and drank while people pray to the indigenous mother of earth, known as Allpa Mama.

Festival of the Sun. Taking place around June 21st, this festival represents a deeply historical celebration of ancestry. Mainly occurring in Otavalo, Ibarra, and Cayambe regions, celebrations usually include important ancient sacred sites such as Cochasquí. The rituals involve locals cleansing themselves in nearby rivers and waterfalls, thus allowing their souls to become one with the forces of nature. People also eat many grains and perform spiritual dances.

Mama Negra. This famous fiesta on the first Friday or Saturday of November takes place in Latacunga, and celebrates the Mama Negra, or a man dressed in women’s clothing. Integrating cultural practices from Spain, Africa, the Incas, and the Mayas, the reason for this celebration is believed to have some connection to the interactions between ancient cultures and slaves. The festival includes magnificent parades, colorful, elaborate costumes and the recognition of Indigenous spirits and icons. Parades fill the town and people throw candy and wine to the crowds. The special dish of this holiday is Chugchucaras, a dish including deep fried pork, popcorn, potatoes, corn, and plantain.

Festival of the Virgin of El Cisne. From August 15th to September 8th, this festival celebrates religion and involves a lengthy pilgrimage. Beginning in the small town of El Cisne, people carry the iconic statue of Virgin Mary on foot for 70 km. The pilgrimage stops in various locations to change the outfit of the statue and to perform short ceremonies, and the ending point is the Loja Cathedral where a massive celebration occurs.
These are some of the most popular, widely celebrated, and significant indigenous festivals in Ecuador. Other holidays commemorate historical events, such as Columbus Day on October 12th, the Birthday of Simon Bolivar on July 24th, and Independence Day on August 10th. Certain regions of Ecuador also have their own historical holidays, such as the Independence of Guayaquil on October 9th and the Independence of Cuenca on November 3rd. But no matter what the holiday, celebrations in Ecuador are incredible. Communities come together in high spirits and share food, drink, music, dance, and traditions, so there really is no better way to marvel at the rich history and culture of Ecuador than to experience an indigenous festival or national holiday.

Made with ❤ in Mindo Cloud Forest, Ecuador